Land Desertification in Europe: Case Studies of Italy and Greece

Learn about land desertification: what is causing it, how it's affecting European countries, and what impact investors can do to mitigate it. 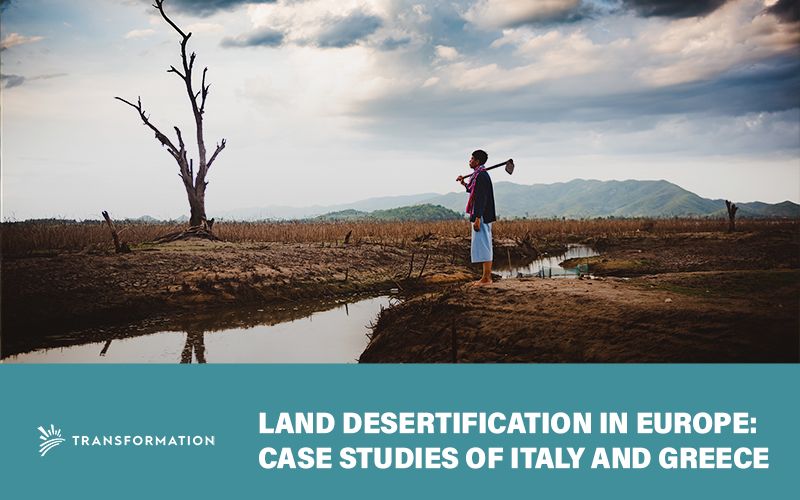 Land desertification, a form of land degradation, is emerging as a critical consequence of climate change which demands immediate attention from activists and investors alike. Land degradation, defined by the IPCC as “a negative trend in land condition, caused by direct or indirect human-induced processes including anthropogenic climate change” currently occurs over a quarter of the Earth’s ice-free land area. Over time, this process results in the “long-term reduction or loss of biological productivity, ecological integrity, and/or value to humans”.

Land desertification poses a formidable threat to both ecological and economic systems in Europe. With desertification steadily shifting the landscape of impact investing both ecologically and economically, following the trends of land degradation in a Italy and Greece as a sample of European countries offers insight into the future of European sustainable agriculture and land management.

The Italian peninsula has been facing disruptive consequences of land degradation for centuries, with current climate trends exasperating the issue. As of 2020, greater than 1/5th of the Italian landscape is at risk of desertification. Over the years, desertification was concentrated in a few “environmentally unfavorable” regions. However, new reports noted worsening conditions in traditionally protected northern regions including Campania, Lazia, and Toscana.

The process of desertification in Italy has been attributed to several factors, including anthropogenic pressure in the form of unsustainable agricultural practices focused on high yield at any cost. These include chemical fertilizers and pesticides, excessive and inefficient water use, and unsuitable crop rotations, among others. Although some estimates have placed the cost of land degradation in Italy between USD$60 – 412 million, frameworks for strategic analysis of degradation and desertification as well as the exact quantification of costs are yet to be established.

The consequences of unchecked desertification in the region could have wide-ranging impacts across multiple markets. For example, straining annual water resource availability would cause ripple effects both within and outside of Italy’s borders. The Italian government may be forced to purchase water for irrigation, hitting the country economically.

Further, the ecological consequences pose a formidable concern for the future of farming in the region. As annual rainfall steadily decreases in volume and duration, the land becomes significantly more prone to wildfires while being drained of necessary nutrients for agricultural cultivation. Taking proactive steps against desertification of land in Italy will protect critical industries in the region and promote healthy agricultural markets for years to come.

Greece’s relationship to land desertification largely revolves around water-related systems whose deficiencies are exasperated by climate change. It is reported that 80-85% of Greece’s total freshwater assets are surface waters vulnerable to evaporation from the existing dry summer season.

According to a 2006 report by National Committee to Combat Desertification (NCCD), 34% of the country is highly impacted by desertification. 49% is moderately affected, and 17% affected marginally.

In a 2019 study, those numbers remained relatively static—although with the added stipulation that historical drought periods alongside anthropogenic pressure represents an imposing threat to the region. Greece is prone to decades long droughts, many which have been recorded for thousands of years. Should Greece face natural drought conditions compounded with anthropogenic resource strain, a situation which scientists predict is an imminent possibility, the economic and ecological consequences would take decades to amend.

The dangerous intersection between man made and natural desertification conditions have had the unfortunate tertiary consequence for some of the most vulnerable populations on earth—refugees. For several years, Greece has been struggling under the weight of the refugee influx from Africa and Asia, which can be attributed in part to ongoing climate crises. With a refugee population of around 50,000 growing by the year in areas affected by desertification, pressure is mounting for climate groups in the region and internationally to address the issue. Although the COVID-19 pandemic has slowed the capacity for groups such as the NCCD and others to take the necessary steps to institute large scale changes, projects remain on the horizon to adjust Greece’s infrastructure towards sustainable land use.

With the EU and UN continuing to work in tandem to combat desertification through programs such as the “Thematic Strategy for Soil Protection” and “Soil Framework Directive”, land desertification remains a topic of interest for public and private entities alike. Maintaining the fortitude and richness of global land resources will be critical for several sustainable missions, including food security and equitable resource allocation. When embarking on impact investment projects, keep in mind factors which may fuel land desertification and find avenues to mitigate the consequences.