Role of Natural Rubber Resources in the Auto and Tire Industries: Present and Future

Uncover the role of natural rubber resources in the auto and tire industries, as well as some of the pros and cons in terms of sustainability 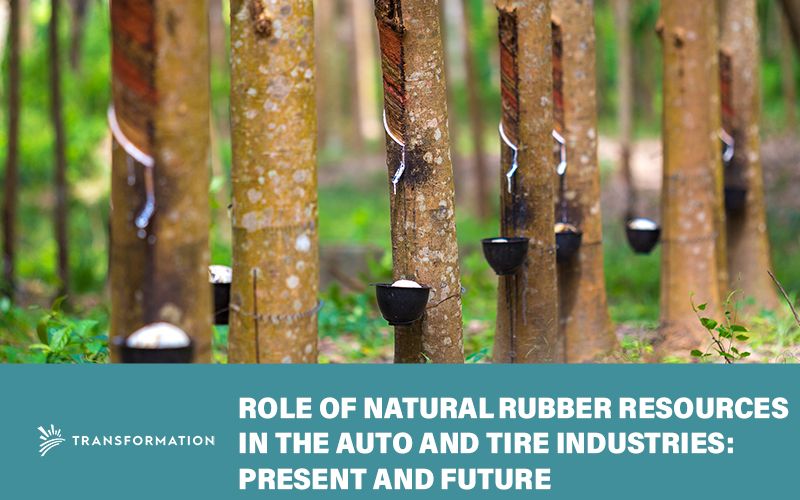 Historically, rubber has been a material overshadowed in its significance to sustainability in the auto industry by flashier materials like metal and minerals. However, in the context of environmentalism and sustainability, natural rubber resources have come to embody a key industry which could change the landscape of auto manufacturing altogether.

For example, in 2018 the EU recognized Natural Rubber as a “Critical Raw Material” if successfully redirected towards sustainable goals. By investigating the rubber industry’s relationship to automobile and tire manufacturing, alongside contemporary efforts to mitigate damaging harvesting methods, the message is clear: In any current discussion of auto industry sustainability, rubber must be addressed as a key source of environmental damage—and large scale industry innovation.

Context for Natural Rubber Use in Autos

Rubber is a key component in numerous aspects of any vehicle, used both in the hardware and exterior elements. Wiper blades, airbags, engine mounts, seals, belts and hoses all contain rubber, protecting both the vehicle and passenger with long term durability. However, tires and the tire industry engulf these smaller aspects, absorbing around 76% of all natural rubber resources produced around the globe.

While synthetic rubber is used to a significant degree in tire manufacturing, according to the International Organization of Motor Vehicle Manufacturers natural rubber still accounted for 40% of the rubber used in tires in 2018. Due to the strong positive correlation between the automobile and tire industries, the two cannot be disbanded in terms of responsibility towards the environmental consequences of natural rubber production and manufacture.

Further breaking down the data will provide insight into the geography and economy of the global natural rubber industry. It will also provide the backdrop for the issues and innovations circulating the market today.

As of 2020, the Natural Rubber market has reached a volume of 15.2 million metric tons. Various reports predict growth in the next few years at a Compound Annual Growth Rate (CAGR) between 2.5 and 4.8%, reaching 20.1 million metric tons by 2026.

The valuation of the global Natural Rubber Market size in 2019 was US$28.65 billion, and has been expected to reach US$33.87 Billion by 2027. This growth has been attributed to a variety of factors, including rising disposable incomes, increasing population, and rising urbanization.

Most natural rubber sourcing takes place in Southeast Asia. Industry giants such as Bridgestone, Michelin, Goodyear, and Continental pull from these ecosystems. Thailand produces the largest percentage of market supply (37% or 4.8 million metric tons as of 2019), seconded by Indonesia (3.3 million metric tons in 2019). Vietnam, China, India and Malaysia also produce on a smaller scale.

The COVID-19 pandemic has disrupted market predictability in the time since these reports were written. Yet, the predicted 4% global economic expansion in a post-pandemic economy maintain the relevance of rubber market growth in the years to come.

Sourcing Rubber Around the Globe

Although natural rubber is classified as a renewable resource, traditional harvesting methods in rubber plantations can lead to various environmental damages if not reviewed. One of the most troubling consequences of rubber farming is the potential for Hevea brasiliensis (rubber tree) to replace native forestry, decreasing the biodiversity of regions and disrupting the carbon balance of the ecosystem.

The results of these consequences of carbon disruption are still being researched. Yet, most often rubber tree plantations replace existing forests, the removal of which releases large amounts of carbon into the atmosphere. For example, a study conducted in the Southern Yunnan region of China showed that for every 1 ha of undisturbed tropical rainforest cleared, 488 tons of CO2 are released into the atmosphere.

Companies such as Michelin have been in the spotlight in recent years for accusations related to irresponsible deforestation for the production of Hevea trees. In January of 2020, a group of German researchers visited a 66,000-hectare plot of land in Sumatra used by the French company for rubber sourcing. Michelin, in partnership with the WWF, had previously put out statements ensuring the project would be “de-forestation free”. Yet, the team of researchers recorded vastly different responses from residents working in and around the plantation. Villagers claimed to have had land destroyed and reclaimed by the company solely for the establishment of rubber trees.

The villagers attributed the companies’ ability to do so by the lack of established legal ownership of land. Most land is held by custom rather than documented law. On the other hand, villagers also claimed that the rubber planting had created jobs in the area for Sumatran men and women.

However, as researcher Fenna Otten, who visited the village in 2017 remarks, emphasis should not reside in short term gains for the villagers. Rather, the emphasis should be on long term sustainable investment and development of both the industry and the local economy it functions in. More concisely, the “mismatch” between company statements and frontline groundwork must be amended.

In June of 2019, German car maker BMW joined the Global Platform for Sustainable Natural Rubber (GPSNR). According to a report by the company, BMW manufacturing requires around 24,000 metric tons of rubber per year for tires, greatly affecting the environments of their source locations.

The BMW Group has noted that they are pursuing the recommendations of the GPSNR to protect and strengthen the rubber producing farms which supply them. They report that 80% is cultivated on small farms spread out amongst 20 million acres in Southeast Asia. Going forward, BMW will utilize the smallholder inclusivity and fair, equitable and environmentally sound supply chain methods developed through GPSNR.

In the past few years the European Tyre and Rubber Manufacturers Association (ETRMA) has been implementing this strategy in various forms. These forms include recycling of ELT-derived Rubber granules, ELT-derives rubber powder for asphalt, material recycling and energy recovery (See Figure 1).

With the auto industry making strides in the direction of sustainability as seen through the rising popularity of electric vehicles and sustainable infrastructure building, environmentally responsible sourcing of materials will continue to be crucial. Meeting climate goals, protecting critical material sources, and maintaining the ecosystems from which we pull materials are all critical aspects of creating sustainable solutions within the Auto and Tire industries. The progress of these changes in coming years will also signify industry commitment to larger climate goals.

*Note on electric vehicles: the weight of electric vehicles/battery packs affects wear and tear AND environmental impact of tires (https://www.emissionsanalytics.com/news/2020/1/28/tyres-not-tailpipe)