Pros and Cons of the Green Revolution 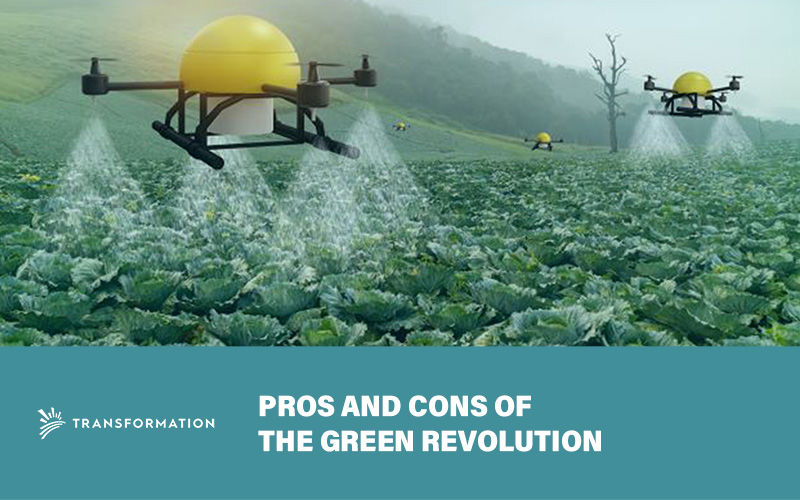 Demographic experts project that the human population will reach over 10 billion in the next three decades. This surge in human numbers will drive up the global food demand. The green revolution offers many practical solutions to help the planet sustain the growing human population.

Read on to discover the green revolution initiative’s history, pros, and cons.

History of the Green Revolution

In the aftermath of the second world war, food scarcity became a real problem for many countries. Severe drought and famine struck many nations causing people to starve. This situation inspired the rise in popularity of the green revolution, which increased food production by raising productivity.

The revolution facilitated the creation of high-yielding crop varieties to solve the food problem. The initiative sparked significant improvements in rice and wheat production. Farmers could further raise their yields by using agrochemicals and synthetic fertilizers. Selective breeding and genetic modifications resulted in disease-resistant crop varieties.

In short, the green revolution has made it possible to feed more people while using fewer resources in food production.

Advantages of the Green Revolution

Thanks to research and development, farmers worldwide enjoy better outcomes when incorporating modern machinery and agrochemicals in crop production.

2.Consistent yields regardless of seasonal changes

These improved crop varieties have better resistance to pests and tolerance to adverse conditions. Their superior quality enables farmers to maintain consistent yields even under unfavorable conditions.

4.Reduces the need for land fallowing

Fallowing is a traditional land preparation technique that allows farmers to work in their fields throughout the year. The technique improves the water retention properties of soil in low rainfall areas. Under fallowing, farmers in low precipitation areas had to wait one or two seasons after a harvest before planting again.

Today, initiatives arising from the green revolution allow farmers to harvest all year round without having to fallow. Agrochemicals, fertilizers, nutrient supplements, and modern irrigation solutions allow fields to yield consistently. This continual production generates more income for farmers.

Shortcomings of the Green Revolution

Today, farmers produce more food than is desired by the market. Up to forty percent of food produced is wasted along the supply chain. Humans waste billions of tons of food each year, unheard of during the pre-green revolution era.

Today, most companies involved in crop genetic modification prefer to patent their work for profit maximization. The patents require farmers to purchase new seeds every year when planting. The dependency on sterile seeds raises the overall cost of production for farmers.

Though pesticides effectively eliminate and control pest populations in planting fields, their continuous use encourages pest resistance. Pests eventually adapt to the chemical solutions making them difficult and expensive to eliminate. Plants are also adapting to the chemical compositions used in herbicides.

The continuous reliance on pesticides and herbicides in crop production poses significant health risks to consumers. Some agrochemicals contain highly toxic compounds which promote the development of cancer as well as other serious medical conditions.

In conclusion, just as many other solutions that has come before, the green revolution has many benefits that we as providers and consumers receive, such as excess food from mass production and lower costs both in store and production. However, there are as many things going against the revolution as are for.

Do the pros outweigh the cons? The Green Revolution has seen a few iterations, and each time we get a chance to make it better. As impact investors, we can invest in research and development for sustainable agriculture methods – not only to better our economical situation, but to move towards a future with better options and less cons.

If you’re interested in making an impact – in our environment, our communities, and our world – join Transformation Holdings in working to maximize the effect investments have on our society. Because sustainable profit doesn’t have to sacrifice sustainable resources.