Are Smallholders the Key to Sustainable Food Systems?

What are smallholder farms? Are they the key to sustainable food systems and, if so, how? Learn about smallholders in this post. 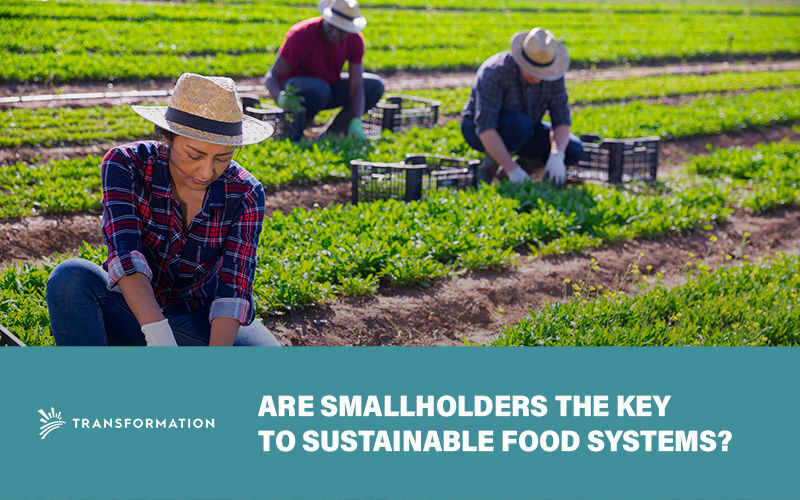 However, there is still much to be done to ensure that smallholder farms can deliver on their potential. Furthermore, this potential is not equally shared but rather depends on the type of farming system they operate. In other words, smallholder farms in different food systems may play different roles. Hence, they require different supports and incentives to ensure they are well-positioned to deliver sustainable outcomes.

Who are Smallholder Farmers?

Smallholder farmers are defined as those who produce less than 2 hectares (approximately 5 acres) of arable land for commercial crops or livestock. This definition is loose and needs to be refined to be more precise.

Additionally, it is important to note that these farmers can have multiple land holdings in several countries, but their total landholdings must be less than 2 hectares. This means that farmers produce food in sustainable ways, not necessarily smallholders. However, this number does not reflect the actual number of smallholder farmers but rather what is considered to be an acceptable amount of land. It is a sufficient land size that can be owned and operated independently.

It is clear that when it comes to food and farming, a sustainable food system meets the needs and expectations of everyone who lives within it. This means that, like other social institutions, there needs to be a balance between the needs of many different people. Smallholder farmers are not growing enough food to feed all their families or communities, making them vulnerable. Because they rely on a single source of income and this source is subject to failure, they are in danger of being left behind by their communities.

The Role of Smallholder Farms in Sustainable Food Systems

If smallholder farmers are the key to sustainable food systems, what are their roles and functions? They are different depending on the type of farming system that they operate within. If smallholder farmers in a sustainable food system play an important role, there needs to be policies and initiatives to ensure that they are well-positioned to deliver on their potential. The roles include:

Smallholder farmers are the ones who make sure that we have food throughout the year. They produce enough food to feed their families and communities, but only a small amount of that is sold to the market. They also decide how much of the rest of their crops are sold as local or regional goods or are sold on larger scales. In other words, they decide whether we need to import our food or produce more locally. Their production levels are not always in balance with the rest of the market, meaning that they sometimes produce more than is needed and sometimes less.

As the primary food producers, smallholder farmers need to be able to sustain themselves physically, mentally, and financially. In this role, they must be active participants in their own consumption. This means that they should choose what they grow or what they buy. They should also be able to buy from wherever they can get the best deal.

Challenges that Hinder the Profitability of Smallholder Farms

Belt-tightening farm policies have led to massive reductions in government spending at the global and national levels, negatively affecting smaller farms. This has led to a decline in their assistance with inputs and inputs prices. This has contributed to the sector’s shrinking and, consequently, to lower yields per unit area and lower productivities.

Furthermore, many of these factors have reduced smallholder farms’ contributions to urban consumers. Therefore, it is clear that a sustainable food system needs to be underpinned by policies that can ensure that smallholder farmers can deliver on their potential whilst coping with externalities and constraints. Other challenges include:

Smallholder farmers are productive farmers in developing countries. However, their potential is limited by the size of their landholdings. This means that, for the most part, they DO NOT work with the same resources and technology as commercial farms. There are very few opportunities available to expand their landholdings and obtain better resources.

Another significant challenge facing smallholder farmers today is a lack of capital for equipment or inputs such as seeds and fertilizers. Additionally, farmers do not have rights to land and access to credit. This means that they are at the behest of the markets to get their hands on the inputs they need.

For smallholder farmers, inputs such as seeds, fertilizers, and other pesticides are extremely important. However, with the removal of price supports and subsidies came a decline in quality and increased costs associated with these inputs due to increased prices.

Access to modern markets is another challenge. From a production perspective, this is a problem, but it has more far-reaching consequences when we look at the other two primary roles. If smallholder farmers cannot sell their crops, it puts them in desperate circumstances. This means that their choices are limited and often disadvantageous, leaving them less control over their future.

Smallholder farms and farmers serve an important part in our supply chain, supplementing commercial agriculture in most – if not all – the corners, nooks and crannies of the world. Developing methods of sustainable agriculture that are affordable and help smallholders grow quality produce, such as better methods of irrigation, can not only increase profitability for the impact investor, but also make a social impact in local communities.