The various climate strategies conceived by European entities are often referenced by other countries in their climate battles due to their ingenuity and efficacy. 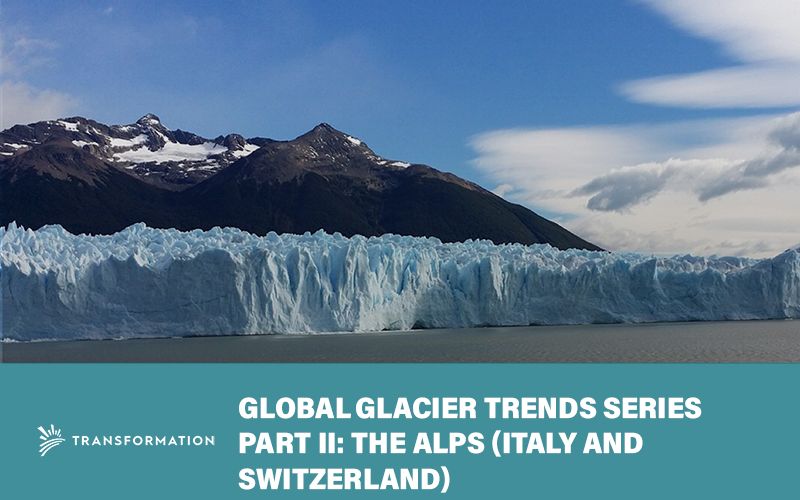 This second installment of global glacial trends examines the effects of glacial recession in Europe. The various climate strategies conceived by European entities are often referenced by other countries in their climate battles due to their ingenuity and efficacy.

In 2019, energy emissions in the EU-27 were measured to have fallen to 24% below 1990 levels, surpassing their 2020 vision of a 20% drop. In 2019 alone, emissions fell by 4%, representing an unprecedented drop within a years’ time. Europe has also been building effective renewable energy infrastructure in the past few decades, with 19.4% of total energy consumption coming from renewable sources. Although this is 0.6% away from their outlined 2020 targets, the continent is showing signs of significant progress in the realm of addressing collective contribution to climate change

While this progress is promising in terms of emerging markets and ensuring stable sources of renewable power, the impacts of climate change are still affecting a critical source of drinking water and power—Europe’s glaciers. Each glacial center plays a critical role in fulfilling regional and country-wide needs as well as sources for future renewable power projects. Unfortunately, these glaciers are acutely sensitive to the temperature changes symptomatic of climate change. Should trends continue their current trajectory, the stability of European communities and promise of future renewable energy projects are in great jeopardy.

Predictions are looking grim for these ecological cornerstones. Glacial studies have demonstrated a significant loss in glacial volume since 1900, halving since the turn of the century with “clear” signs of acceleration. Projections by the European Environment Agency demonstrate a continuation of glacial recession through 2100.

The Alps are an ecological cornerstone of European life and culture, extending through 11 countries and covering more than 80,000 kilometers. Often referred to as the ‘Water Tower’ of Europe, the Alps provide approximately 40% of Europe’s freshwater as of 2019. Studies on glacial retreat in the Alps have shown grim future projections, with scientists recording the fastest rates of retreat amongst global mountain chains in recent years. According to NASA’s Land-Cover/ Land-Use Change Program, approximately 50% of the Alps’ total glacial volume between 1850 and 1975 has been lost, and up to 40% of the remaining volume lost since 1975.

The sensitivity of the Alps was further illuminated during a heatwave in 2003, where 2.45 meters-water equivalent worth of glacial ice was lost in one season. These large-scale melts fuel the destructive flooding which is becoming increasingly common to the Alpine region. 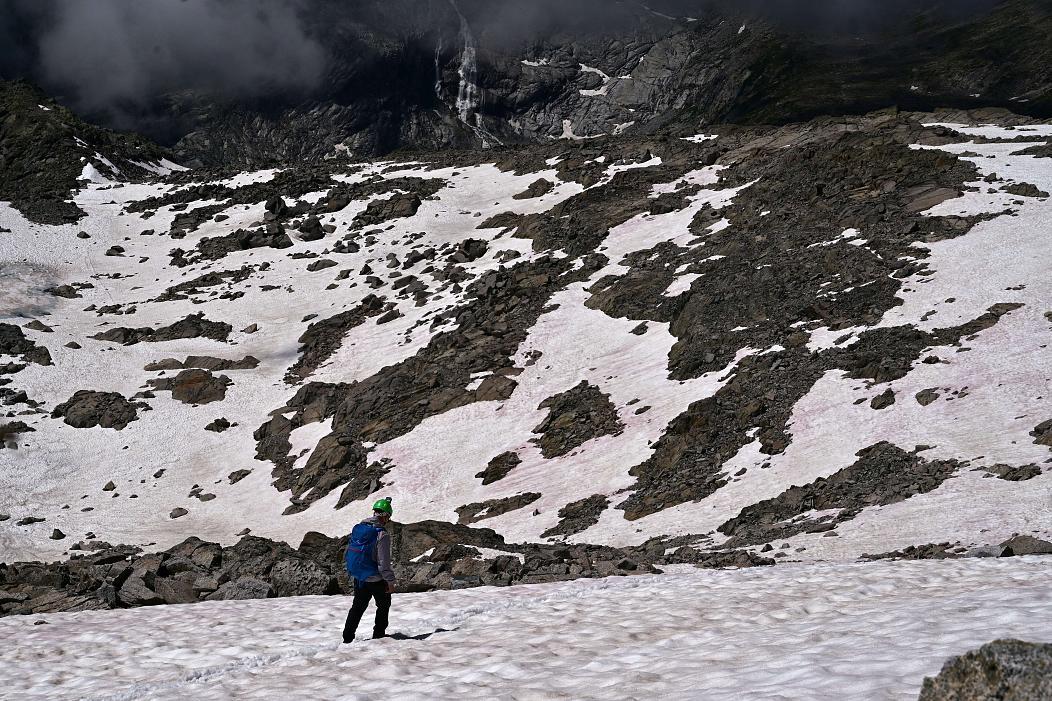 Pink ice, also referred to as “watermelon ice”, has been spotted within the Presena Glacier in Italy’s Trentino region to the north. This peculiar phenomenon, in which ice appears as a marble landscape of pink and white layers, is the result of a natural process of algae growth. This particular species of algae grows in response to the increased sunlight and melt-water flow of the spring and summer seasons. Winter temperatures reduce these conditions, and the algae naturally disappears.

The danger of this otherwise natural process lies in the interaction between the algae’s coloration and sunlight. The red carotene layer produced for UV radiation protection darkens the ice, minimizing the high albedo levels of glacial ice. Algae free ice usually reflects around 80% of the sun’s radiation into the atmosphere, protecting the ice from melts. However, the dark coloration of the algae allows for increased absorption of UV radiation from the sun, accelerating ice melts.

With climate change extending comfortable proliferation temperatures for algae into the winter season, the mechanisms of melting accelerate. While the degree and significance of pink ice’s impact on glacial melts is still under study, its presence in the winter months represents the growing degree to which climate change is affecting isolated corners of the world.

Thus far, pink ice primarily acts as a superficial signal to the presence of climate change in the Italian Alps. However, situations of imminent danger are currently in motion. Rapid acceleration of glacial melts on Mont Blanc is a looming climate emergency for those within its flood path. Towering 4,000 meters between the French and Italian border, Mont Blanc has been a long standing tourist hub for its beautiful glacial and river scenery. Nevertheless, in recent years the Secure Mountain Foundation which has monitored the Aosta Valley since 2013, claims that the rising temperature of the waters beneath the glacier are inducing avalanches and ice detachments.

These symptoms of regional glacial retreat have been attributed to climate change and are supported by harrowing data. For example, a segment of the Planpincieux Glacier was measured to have moved at a shocking one meter per day in October of 2019 as compared to its average 10 centimeters per day in normal conditions.  While officials in the region do not believe there is concern for the immediate mortality of those living nearby, studies by University researchers in France and Italy outline disturbing future projections.

In the context of anticipated rising global temperatures, a study of the Mount Blanc massif predicts that by 2100, winter discharge of the Arve river will increase 80% compared to data from the beginning of the century, and in the summer season the runoff will decrease by 40% (due to glacial retreat and lack of glacial volume). The study concludes that such projections spell a future in which water quantity and quality are compromised alongside hydroelectricity projects, agriculture, tourism, and aquatic ecosystems. With such high stakes, finding innovative solutions via investment to reroute dismal projections is of the utmost urgency— one need only look to neighboring mountain ranges for proof.

Like Italy, the Swiss Alps are world renowned for outdoor adventurers for their beauty and tourism opportunities. Villages and towns with close cultural and economic ties to the Swiss Alps can be found scattered amongst the range base in picturesque situation. However, these communities have faced increasing numbers of geological threats to their collective livelihoods as the stability of the Alpine glaciers above them have waned by the year.

Unlike the Italian Alps, the threat to the Swiss resides in historical glacial melts rather than those impending. Historical glacial recession has led to the creation of new lakes in areas previously unoccupied. As a result, flash flooding from storms have become more regular occurrences, to devastating results. Recent events in Valais and Grindelwald, Switzerland are testaments to this growing issue.

Since the 1970s, there have been an apparent uptick in floods, landslides, and debris flow in the Valais region. Notable flash floods have occurred throughout the 2000s, causing infrastructure damage and community bereavement. The causes of unmanageable flooding have been attributed to fragile flood embankments unused to the volume of water via glacial recession as well as development on floodplains.

The village of Grindelwald, nestled at the base of the Swiss Alps, has been facing similar problems as those in Valais for the past few decades. The 3,600 residents have been experiencing similar flooding of lakes and rivers, and another geological threat—rockslides. The rapid glacial melt of the Lower Grindelwald Glacier exposed a large segment of the 13,000 foot cliffside, with rocks and sediment once held together by ice now free to break at the will of natural events. Innovative solutions, such as a $15 million dollar While the threats in Valais and Grindelwald are being actively managed by dedicated officials, monitoring these areas remains critical as global temperatures continue to rise.

While ecological threats to Alpine communities are disturbing, hope remains through the actions of sustainably minded investors and corporations. Interest in sustainability and renewable energy are on the rise as illustrated through companies’ setting of sustainability goals. Investing in preventative climate action projects to mediate environmental risk factors can made great strides in environmentalism through a changing investment atmosphere. As outlined in the previous installation, glaciers and mountain ranges generally are markedly sensitive to temperature changes in both positive and negative directions. Should the global community remain committed to 2030 and 2050 carbon reduction and omission goals, the likelihood of glacial stabilization rises dramatically.

In other words, glacial protection has great potential for realized gratification. Investment interest has recently been trending away from water resource protection, including mountain resources and glaciers, in favor of other more “profitable” areas of energy. However, investing in preventative ecological measures as well as following through on carbon goals will make a tangible different to the lives and ecosystems which characterize the Alps.