Learn about Guyana's energy solutions for renewable and nonrenewable energy, and how the country can lead the way. 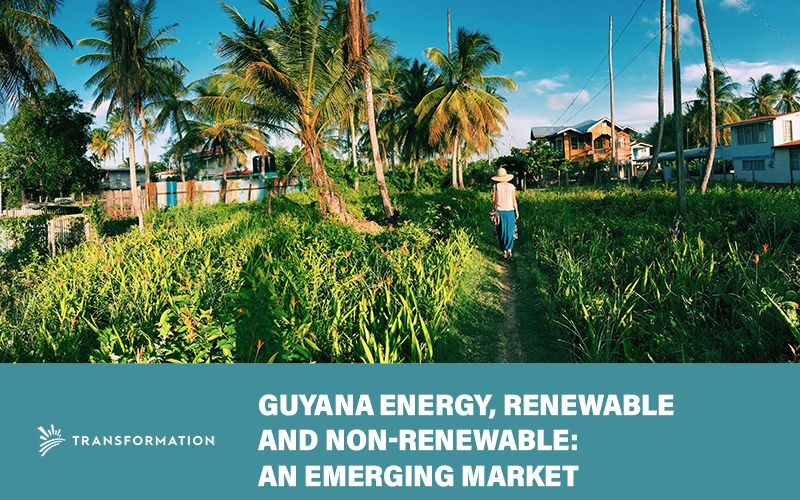 Guyana, a country of less than 800,000 located in the Caribbean region of South America, has increasingly attracted interest for energy investment after the discovery of rich oil reservoirs in 2015. Found by Exxon Mobil, these reservoirs estimated at 3.7 billion barrels worth of oil have catapulted Guyana into the arena of other major oil producers, offering ample opportunity for economic growth—if regulated carefully.

The circumstances surrounding the Guyana Basin discoveries have brought important questions of environmental and economic sustainability to the surface, particularly for those invested in Caribbean renewable and nonrenewable energy. Examining the implications of such a find on Guyana’s economy and environment provides insight into the future of non-renewable markets in the region and the role of “sustainability” in in its most modern interpretation.

History Behind the Guyana Basin Finds

Leading up to 2015, Guyana had searched for oil for almost a century. While explorations by oil giants such as Mobil, Total and Home Oil Inc. had set forth in the 1980’s, the search for resources did not pick up steam until 2007.

In that year, Guyana had been awarded 33,000 square feet of territory after a dispute with Suriname, and shortly following ExxonMobil was given permission to explore for offshore oil. After the report published in 2015 claiming a large find within the 6.6 million square mile Stabroek Block, ExxonMobil expanded their investigation. As of 2020, sixteen significant oil discoveries have been made in the region raising the estimated crude find to 8 billion barrels.

These developments have spurred excitement, but there lie great uncertainties in the capacity of Guyana’s oil infrastructure to protect the variety of interest groups backing the discoveries and exports. As of November 5th, 2020, Guyana has received its third payments of oil-and-gas royalties amounting to over US$4 million. The Natural Resources Fund (NRF) of Guyana, who currently holds the deposits, is under pressure to deliver on its message to provide “for the present and future benefit of the people and sustainable development of the country”, part of which involves promoting green economic practices.

Out of this influx of cash have come potential green energy projects to supplement the use of natural resources within the country, including wind and solar fueled energy solutions. This push to move away from its dependence on fossil fuels and instead shift towards clean energy solutions arose considering Guyana’s environmental concerns.

Being a member of the Caribbean region, the fallout from mismanagement of waste production or spillage would put their biodiverse resources at great risk. Guyana has also been recorded by the World Bank as one of the countries most at risk in regards to rising sea levels. This concern is evident in the recent approval by the World Bank of a US $26 million allotment to mitigate flood risks.

These factors in mind, the country has taken weighty steps to implement green air and solar solutions. On November 13th, the Guyana Energy Agency (GEA) signed a deal allotting US$1.1 billion to establish solar farms at Lethem and Bartica, which is hoped to be completed in less than a year. Along with the money allocation are plans to build infrastructure in which to channel solar energy to townships currently relying on fossil fuels.

Wind farm projects have also been a focus of Guyana sustainability organizations, but that progress has been much slower. Since 2015 Guyana has sought to build wind farms on Hope Beach, but the project has yet to make significant headway. Nonetheless, in statements concerning sustainable energy, wind farms remain a topic of investment interest. Although Guyana has struggled under pressures stemming from the COVID-19 pandemic, their partnership with the World Bank has kept them on track for many of their sustainable energy targets.

In terms of sustainable energy and natural resource production, Guyana’s dramatic shift in position over the last decade illustrates a compelling narrative for the future of energy investment in the Caribbean. Balancing the lucrative pull of natural resource mining with the desire for environmental protection and stability is the name of the game, and Guyana is in a position to lead the way into the unknown territory. Guyana’s balancing of various interests is emblematic of a new era of energy investment and production, meeting at the intersection of nonrenewable and renewable energy solutions.