Many companies are coming to the realization that change has to happen, and happen soon. We're working to find examples of green technology that make an impact. The advances mentioned below are just the top of the technological iceberg. 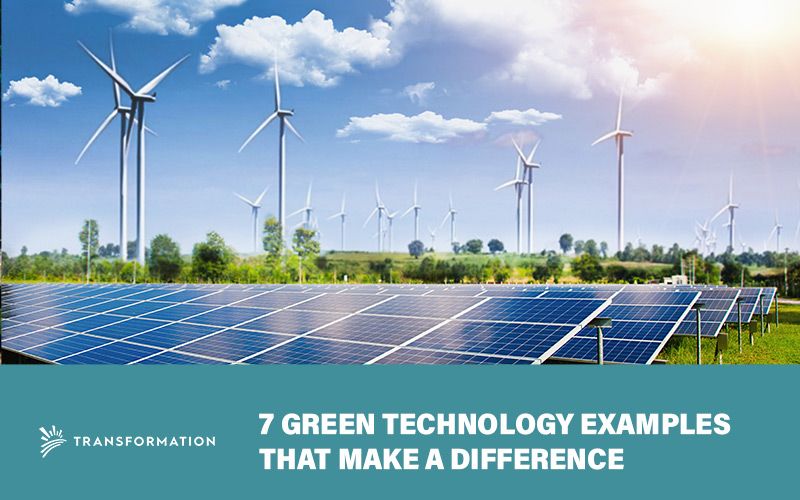 Green technology, also known as sustainable technology, takes into account the long- and short-term impact something has on the environment. There are numerous examples of green technology and what goes into the making of a green product or technology, such as energy efficiency, recycling, health and safety concerns, renewable resources, and more.

Green technology offers us the best hope to reverse the effects of climate change and pollution. In this article we will introduce some new technological innovations that transform the energy sector. These technologies allow for the captivation of clean energy from natural resources such as water and sun, and have great potential to revolutionize the energy market towards sustainability.

There is an excessive and wasteful use of clean water. The Earth naturally recycles its water, but new technologies help to speed up the process.

According to the Washington State Department of Health, our groundwater and surface water supplies are at risk of overuse in many areas. The demand can be greater than the amount supplied by rain and snowmelt.

The United Nations water agency (UN Water) estimates that more than 80 percent of the wastewater generated by society flows back into the ecosystem without being treated or reused.

In this field, there are still only a few technological developments, but the existing ones are important.

Key developments include membrane filtration, microbial fuel cells, nanotechnology, development of biological treatments and natural treatment systems such as wetlands. All of the named processes are used to make water more drinkable or significantly reduce the presence of pollutants from what is discharged into the sea and rivers.

Other new recycling technologies aim to help solve the plastic waste problem. Chemical recycling, for example, is an innovative process that uses chemicals to break down post-consumer plastic waste into its valuable chemical components. These components can then be used as fuel or converted once again into new plastic products.

Self-sufficient buildings are buildings designed to be operated independently from infrastructural support services such as the electric power grid, gas grid, and municipal water systems.

Solar panels, for example, are designed to capture energy from the sun, but the majority of the sun’s energy is lost as heat. New inventions in solar panel design allow for the production of both electricity and heat. These solar panels help buildings produce their own heat and electricity through solar energy.

The front of these panels is designed to generate photovoltaic energy while the rear produces hot water by means of a heat exchanger. This provides households with free hot water that has been sourced in an environmentally friendly manner.

4. Generation of energy from the waves

The energy from waves, tides and currents, known collectively as ocean energy, is a massive resource. The total energy available along the American continental shelf could potentially provide roughly half of the total US supply.

An Australian company has been working on a system that uses underwater buoys to convert sea waves into zero emission energy and desalinated water. The steel-made buoys, which can currently generate 240 kilowatts, are the main part of the system. The buoys are less susceptible to extreme weather damage while underwater waves are sufficient to generate power.

Another promising technology in this sector is tidal energy. It has huge potential in the renewable energy market because of its predictable and consistent availability.

5. Vehicles that do not emit gases

One of the greatest environmental polluters is the automotive industry, but many people worldwide depend on their cars. It is estimated that there are currently around two billion cars on the road, and within 20 years this number is predicted to double as a consequence of rapid growth in India and China. In the automotive industry, alternative fuel vehicles, also called green vehicles, have been introduced as an alternative that is less harmful to the environment.

Solar energy is the most abundant energy on earth and solar power is on the rise. While solar plants have become common in many households, the technology is still constantly improving.

Scientists have been able to overcome a design flaw of solar panels by allowing them to collect energy in both the rain and sun. These so-called all-weather solar panels allow any homes, no matter the geographical location, to produce electricity for their home. During rainfall the solar panel generates electricity from the force of the rain falling on their surface.

Vertical Farming is an eco-friendly technology that has the potential to solve our food production problems. The concept is to grow produce in stacked vertical layers rather than horizontally.

The benefit of vertical farming is increased sustainability. Some vertical farms don’t even require soil, and reduce water use exponentially. The technology allows us to build vertical farms in buildings around cities and provides people with fresh and nutritious food. The newest inventions in vertical farming, such as an intelligent root misting system for indoor produce, allows vertical farms to use 95% less water than a regular field.

Vertical farms have the potential to feed overpopulated cities while using less land and less water. They also cut greenhouse gas emissions by eliminating the need to transport the produce over long distances. Over the past few years, vertical farms have sprouted all over the world including places like Vancouver, Panama, Singapore, and cities in the UK and the U.S.

Investments in technology are necessary to advance green energy solutions and make the much-needed transition towards a sustainable energy infrastructure. Maximizing consumer and economic benefits while simultaneously minimizing energy losses and environmental impact is essential to protect the health of the world for not only the present but also future generation.

With all their promise, the advances mentioned above are just the tip of the technological iceberg. Many companies are coming to the realization that change has to happen and it has to happen soon. As our resources dwindle and are surpassed by demand, we work to find those examples of green technology that make an impact, and the people who want their investments to make an impact.

Contact Transformation, LLC to join us in transforming the world and our future.