Learn about ocean acidification, its history, the effects it has on global environments and markets, current research and more. 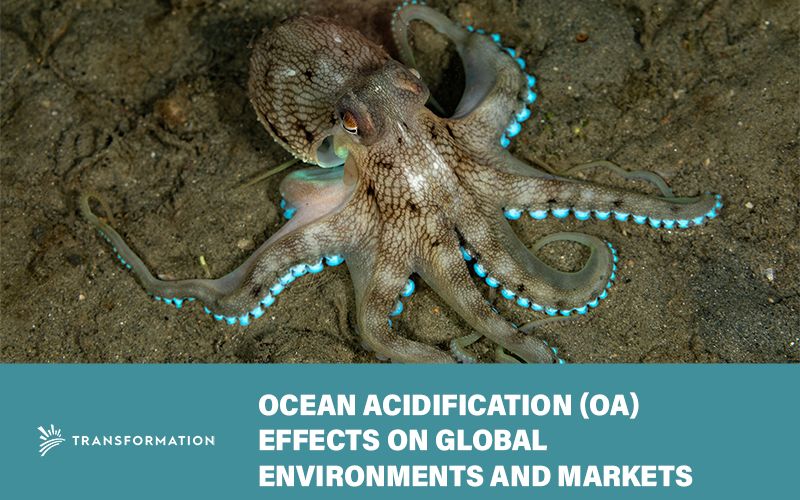 By investigating the past, present and future of ocean acidification around the globe, the variety of investment markets relating to this sector of climate change mitigation emerge. In turn, these markets are potentially unique entry points for entities working towards finding solutions.

Ocean acidification (OA) occurs when atmospheric carbon dioxide dissolves into ocean water, reducing the seawater’s pH and concentration of carbonate ions. The function of the ocean as a “carbon sink” has historically functioned to the benefit of global environmental stability.

However, industrialization and large-scale emissions of greenhouse gases have spurred an overall trend in pH reduction across all oceans. The consequences have such wide reaching implications that the World Meteorological Organization (WMO) considers it a primary climate indicator. As noted by the European Environment Agency (EEA), the ocean surface pH has declined from 8.2 to below 8.1 throughout the industrial era, losses corresponding to increased ocean acidity by about 30%. This process affects marine life in unique ways which ultimately threatens their viability in traditional habitats.

Consequences of OA on Sea Life

Ocean acidification affects marine life in a myriad of ways which have massive impacts within and outside of the water. As noted by Oceana, one of the greatest dangers of unchecked acidification is the collapse of important food webs. By disrupting the concentration of carbonite ions in the ocean, the calcium carbonite shells of small sea creatures often form disfigured or unstable, no longer suitable for protection. Calcifying phytoplankton, whose diverse ecology makes up a large percentage of the base of the food chain, are also at risk of losing their important protection mechanisms.

But, calcifying ocean creatures aren’t the only ones at risk from the effects of acidification. Animals like the squid are at risk as well, as the acidification process disturbs oxygen levels in the water which they rely on to function. These and other species, if left with an unviable chemical environment, would cause massive disruptions up the food chain. The consequences of this disruption are not only an ecological calamity, but an economical one.

Consequences of OA for Global Economy

Several oceanic economies have been targeted as at risk from OA. In a study conducted by the NOAA, markets for the West Coat Dungeness crab, Alaska king crab and New England sea scallops are at risk alongside the estimated US$8.5 billion coral reef assets in Florida.

International implications loom as well. Although difficult to measure across the varying socioeconomic divides, a study through the University of Alaska found  a potential loss of between US$141 to $227 billion globally following current trends. While this only represents between 0.09% and 0.21% of global communities, many affected industries would be irreversibly damaged, creating ripples of unemployment and economic strife among at risk communities.

As noted by the Global Ocean Acidification Observing Network (GOA-ON), oceans will continue to experience differing levels of acidification due to their proximity to carbon producing entities. While this variance in carbon concentration has delayed the success of international standards for dealing with the issue, it has opened the market for individual entities to make unique contributions through activities such as impact investing.

In a study by the OA-ICC, it was found that the ocean acidification could potentially help a particular species of Canadian oyster (Crassostrea virginica) in reproductive development. Further, although the offspring of oysters reproducing in this test environment were smaller in size and had numerous deformities, their survival rate was higher than under traditional pH conditions.

These results signal the potential that OA cannot be considered solely on the spectrum of destruction, but rather as an environment in which to study unintended and even positive outcomes of the shift. Studies of this nature can also assist scientists and investors alike in making more informed decisions on what negative aspects of OA to focus their interests and innovations towards.

The desire to study the geography of ocean acidification has also led to unique technological feats, hastening the speed with which we understand the issue while expanding the data available for analysis. According to the National Oceanic and Atmospheric Administration (NOAA) who sponsored an Antarctic CO2 measurement expedition, the Saildrone 1020 spent 196 days – traversing over 13,000 miles – taking measurements of the Southern Ocean’s CO2 content.

It had been assumed prior to the experiment that the Southern Ocean was a primarily a carbon sink, with estimates of it absorbing up to 20% of greenhouse gases causing global warming. However, the results of Saildrone 1020’s expedition showed that the ocean was also emitting CO2 rather than merely absorbing it, particularly in the windy autumn and winter months. Projects like that of Saildrone 1020 provide new insight into the factors producing and trapping carbon and could help scientists target the correct means to protect affected environments.

Scientific coalitions are not the only entities who have taken on the issue of ocean acidification. Small businesses like Luke’s Lobsters in Maine have provided avenues for grants towards protecting affected ocean resources. In response to the environmental pressures put on Maine’s ocean faring communities, several businesses have taken up the practice of “aquaculture”.

Aquaculture involves the farming of environmentally friendly crops, in this case kelp, throughout the offseason. By doing so, they open a market previously dominated by international players as well as offsetting some of the damage wrought by OA.

While these systems are not perfect nor permanent, they do represent steps by independent bodies towards mitigating some negative aspects of their own industry. These markets hold great potential for creative investment in a way which not only satisfies industry quotas but cultivates the industries themselves.

Ameliorating the negative effects of OA is critical in the pursuit of oceanic environmental protection, and with he rise of new technology comes the rise of new investment markets. It is clear through the examples set by the scientific bodies and small businesses above that there is an appetite to merge the interests of sea reliant industries with the mission to protect against negative consequences of OA. When searching for investment opportunities, OA mitigation carries high potential into the 2020’s.