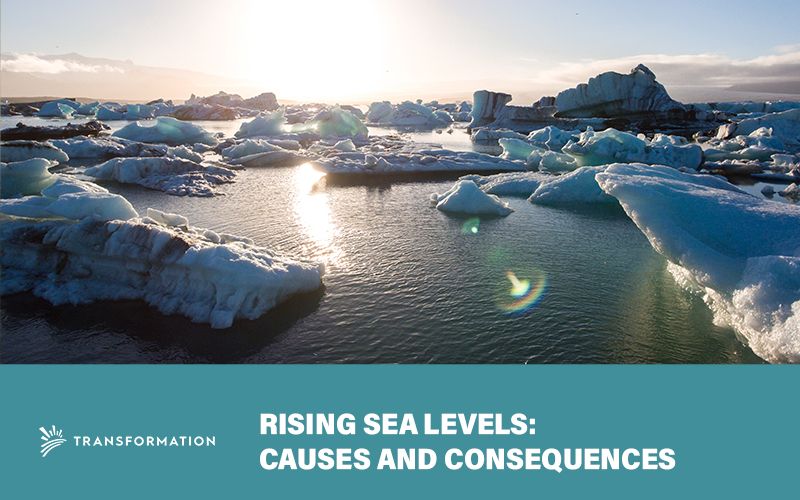 As Gail Whiteman of Lancaster University said, “What happens in the Arctic does not stay there.” To find a representative case study of the effects of Arctic sea ice melts towards rising sea levels, one need only look north to the coastal communities of Greenland. Over the course of 2019, Greenland lost a record setting 532 billion tons of sea ice. This number is twice the country’s annual average of 225 billion tons, following the general Arctic trend of warming at around twice the global rate.

Fast forward to 2020, similar patterns have emerged with few signs of deceleration. As of October of 2020, the extent of Arctic sea ice is the lowest recorded in the satellite record, resting at 3.07 million square kilometers below the 1981 to 2010 October average.

The consequences of these melts have spread far beyond the tundra regions, raising the global sea level an average of 3.2 millimeters per year. While this volume may appear insignificant, the consequences of unmitigated ice melts are at least costly, and at most catastrophic.

Recent reports have shown a new contributing factor to sea ice melts: warmer arctic rivers melting sea ice structures from beneath their surfaces. Examining this new evidence, along with other factors affecting ports and cities around the world, it is apparent they foreshadow a vastly changing market for impact investing and environmental protection.

The process in which warmer river water melts Arctic sea ice has recently come under the microscope of scientific communities, with the consequences being given more credit than previously granted. The process is characterized by a positive feedback loop. The heat absorbed by land masses steadily warms nearby riverbeds. The heat absorbed by these riverbeds then passes into freshwater rivers, with that warm water eventually flowing into the Arctic Ocean.

The destructive effects of this warming come to light in the spring season, as the high riverine heat triggers breakup of Arctic sea ice around the mouths of these rivers. Year by year this pattern carries on, delaying the starting date for ice formation and reducing the average period of ice retention. In fact, in a publication through Science Advances, it was found that up to 10% of the ice loss in the shelf region of the Arctic Ocean between 1981 and 2015 could be contributed to this warming feedback mechanism. While warming river water temperatures are only one factor in several contributing to the melts, keeping an eye on these emerging mechanisms is critical to the preservation of global communities and economies reliant on a stable oceanic environment.

Coastal ports and markets around the globe represent the primary group to be threatened by rising sea levels. According to a 2020 report by the OECD, without any significant changes to our current trajectory, “flood damage under higher-end sea level rise of 1.3 meters would be equivalent to 4% of world GDP annually (USD 50 trillion annually).” Other sources have found similar evidence, with the National Academy of Sciences finding that uninterrupted sea level rise could affect almost 200 million people by the end of the century.

This issue is only exacerbated around the globe by the ongoing damage wrought by heavy biodiversity loss. Coral reefs have historically been important natural barriers to lessening the effects of wave induced flooding in coastal cities. Significant losses of these reefs has already cost nations, many having made efforts to replace their function with man-made structures such as sea walls.

For example, Cuba, Indonesia, Malaysia, Mexico and the Philippines together suffer upwards of 400 million USD in storm and flood damages each year. Uninterrupted rising of the sea levels would only add to these cost calculations, affecting established and prospective opportunities for investment.

The effects of massive Arctic ice melts are not restricted to the tundra or the tropics. Rather, coastal communities in the US, including states from Maryland to Florida, are already bearing the financial and economic weight of rising sea levels.

In Annapolis, Maryland, as recorded by the National Oceanic and Atmospheric Administration, natural high and low tide patterns in the area have become sources of destruction and unpredictability. The high tide level often extends 1.75 to 2 feet above the daily average, flooding roads and businesses. They are recorded to have lost as much as $172,000 a year, or 1.4% of their annual revenue.

Travelling down the coast, Florida communities are suffering similarly. No stranger to tropical storms, it has become apparent that rising sea levels are feeding unforeseen destructive flooding during storm season. Following the Tropical Storm Eta, counties across the state struggled to maintain a viable drainage system. As reported by Local 10 Hurricane Specialist Bryan Norcross, several counties’ reliance on a gravity system in which the ocean water is lower than the water on land would become unviable under rising sea level conditions. These accounts represent a fraction of what could lie ahead without proper investigation and repair in the Arctic arena.

The problems presented by Arctic ice melts open opportunities for innovation in the realm of sustainability. Groups like Ice911 (now the Artic Ice Project), an Arctic ice restoration nonprofit, have been exploring the realm of “geoengineering”. Geoengineering is the application of technical solutions to relieve negative impacts of climate change on the environment.

The Artic Ice Project has explored ice protecting using unconventional methods, including layering hollow glass spheres on the ice to replicate the reflection of established multi-year ice. The field is growing, and with the speed of acceleration of the Arctic ice melts, supporting these efforts represents opportunity for any globally minded sustainability mission.

Identifying the causes behind Arctic sea ice melts and their most destructive mechanisms have been important first steps in protecting coastal communities around the globe. It is critical through the next decade and beyond to continue identifying possible solutions to this growing problem, and to support current and future efforts to do so.