See the breakdown of COVID-19 vaccine distribution plans within the ASEAN and EU countries, the differences, and the positives. 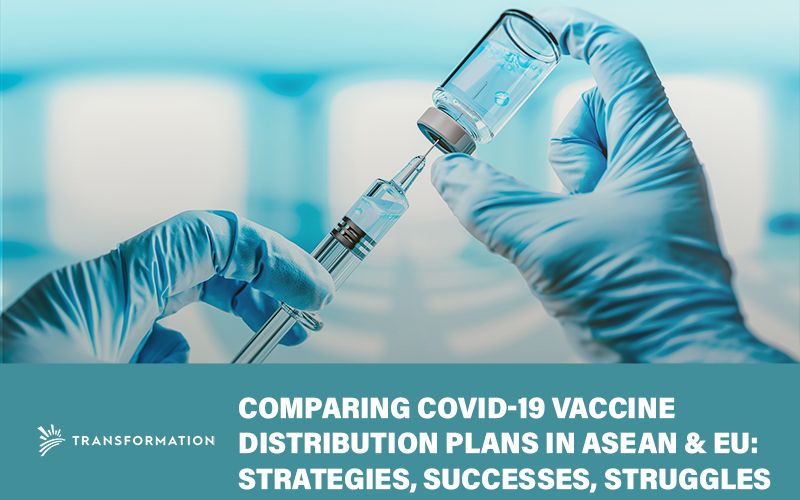 As the world collectively approaches the year-mark of the COVID-19 pandemic, vaccine production and distribution represent a beacon of light at the end of the tunnel. The world sits at the primary stages of both, each country and coalition taking a unique approach to the problem.

In comparing the current approaches of ASEAN and the EU at their current states of development, a picture emerges of where these economies stand on their paths to recovery, and in what state they can expect to come out the other side economically. With the pandemic affecting each sector of the global economy, tracking trends in global recovery will be helpful in identifying potential markets for investment, particularly in sustainability.

In the absence of the speed and infrastructure of dose distribution proposed by the World Health Organization’s COVAX program, member states of ASEAN as well as others have turned to advanced purchasing options for vaccines from Chinese and Russian pharmaceutical companies.

In December of 2020, the Cambodian government issued a statement approving their inclusion in the WHO’s COVAX programme for 20% population coverage. However, as of January 15, the government in Phnom Penh superseded this earlier statement, with the Cambodian PM approving the Chinese Sinopharm vaccine for distribution as well as receiving a dose himself. China has donated 1 million vaccines used for inoculating 500,000 people on Cambodia’s priority population list. Distribution from Chinese companies SinoPharm and SinoVac are for use by government leaders, Royal Palace, National Assembly and Senate.

As of early January 2021, Indonesia’s food and drug agency has approved the distribution of China’s SinoVac vaccine, and is the first country outside of China to do so. However, struggles with implementing a successful distribution plan for such a large population size (around 268 million) as well as working with price sensitivity to the proposed price of US$20 per dose. According to reports from a late-stage human trial in the country, the jabs were shown to be 65.3% effective, lower than trials in other countries that have used the vaccine.

According to the Anadolu Agency, “Malaysia has signed preliminary purchasing agreements with Pfizer, AstraZeneca, and global COVAX facility to secure coronavirus vaccines for 40% of the population.” Similarly to many other ASEAN nations, they too are in final negotiations with Chinese pharmaceutical companies SinoVac and CanSino, in addition to Russian Gamaleya Center. These deals are enough to cover 80% of the population (26.5 million people).

Laos is currently in discussion with Russian officials for use of the Russian Sputnik V vaccine after it passes its third round of certification procedures. Within these discussions are also potential agreements on the shared collaboration between Russian and Laotian scientists and medical staff continuing past the pandemic. Discussions of this kind highlight the potential for COVID procedures to build relationships not otherwise pursued—a potential which investors and policy makers alike would benefit from monitoring.

The Philippines government plans to inoculate about 25 million people by March (around a quarter of the total population) beginning in June 2021. However, plans have been set by the Duterte administration to initiate the rollout of Pfizer, SinoVac, and AstraZeneca vaccines (in that order) by February as close to their arrival as possible. They are simultaneously working with the WHO’s COVAX facility to procure their percentage of the 30 million doses for distribution to developing nations. However, this method is overshadowed by the potential of SinoVac pricing benefits which are purportedly cheaper than those offered by American pharmaceutical firms (although this cannot yet be corroborated).

This sample of ASEAN member nations illustrates that these nations would prefer to take safer routes to large scale vaccinations, but the growing unmanageability of the problem has forced many to resort to less guaranteed methods of procurement. There are also signs that those countries and companies which provide the fastest and efficient solutions may be forging longer term relationships both scientifically and politically.

As early as June 2020, the European Union has been working to implement a viable vaccine strategy, initially centered around a vaccine Alliance comprised of France, Germany, Italy and the Netherlands. This coalition sat on two pillars: securing sufficient vaccine production and distribution and making use of the regulatory flexibility of the EU to encourage speedy recovery. Similarly to the individual countries of Asia examined earlier, the EU planned to use a €2.7 billion Emergency Support Instrument to allow the success of this strategy.

Throughout June and July, the EU expanded its protectionary jurisdiction into Africa, simultaneously approving multi-million euro support programs to worldwide partners like South Africa, Uganda and Venezuela. However, it was only in August that the EU Commission signed its first contract with AstraZeneca, with the stipulation that each member state would be able to purchase 300 million doses of the AstraZeneca vaccine.

Signs of progress were promising, with sprawling programs of humanitarian aid and distribution infrastructure laying the groundwork for a successful vaccination program. However, the breadth of programs may have been more of a burden than an asset, as the new year brought sluggish distribution in the wake of a new wave of COVID-19 cases.

As of January 19th, most EU member states struggle to reach more than 3 vaccinations per 100 people (see Figure 1). With hospitals across the EU quickly approaching their ICU capacities, steps to expedite vaccine distribution have been put into effect. For example, AstraZeneca and Oxford University have partnered to produce a vaccine to be approved for widescale use in combination with already approved Pfizer and Moderna doses.

What has been characterized as an “uneven start” of distribution in Europe has caused ripple effects, exasperated by complex conditions necessary to keep the vaccines viable. The Pfizer vaccine has been notably difficult to store and distribute, as at the moment long term storage necessitates a deep freeze maintained at minus 70 degrees Celsius (minus 94 Fahrenheit). This has caused the discarding of thousands of doses, adding an unexpected dimension to distribution problems.

As illustrated through the examples of the EU and ASEAN member states, COVID-19 vaccine distribution has been far from a horizontal success story. While vaccine distribution struggles have guaranteed no expected world recovery date, they have forced countries to adapt in ways which are having intended results.

Vaccine related obstacles have encouraged countries to build crisis adaptability within their governmental frameworks, have opened previously limited lines of communications between countries, and have illuminated unseen flaws within distribution networks in developed and developing nations. The lessons learned through this crisis will certainly carry weight into the future of international cooperation and trade, and keeping an eye on the progress of COVID related markets may help guide direction in this new era.