Wildfires at Home and Abroad: Significant for Climate Change Investors

Wildfires are a significant area of needed change for climate change investors. Learn why, and one example of that change. 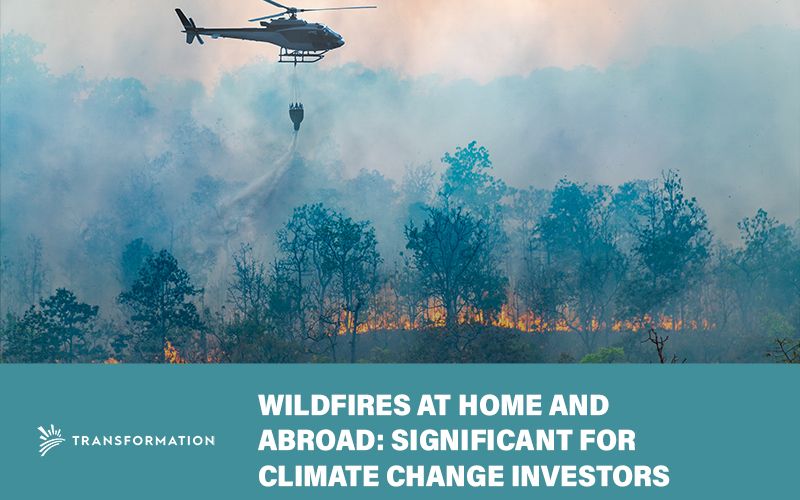 California residents are no strangers to wildfires, a natural and often predictable function of a healthy ecology cycle. However, Californians could not ignore the palpable increase in fires this year even under the restrictions of the COVID-19 pandemic. Compared to the 2019 figures recording 47,673 fires, 2020 jumped to 52,934.

Although wildfires are classified as ‘natural disasters’, 85 to 90 percent of American wildfires originate from human activity. Relatively minor human errors, such as discarding a lit cigarette or leaving a campfire unattended, balloon into enormous consequences exaggerated by unnaturally dry conditions via climate change.

In 2020, wildfires across these categories raged over 4% of California’s 100 million acre landscape. While that percentage seems minimal, in 2020 alone California’s fires have reportedly put at risk 4.5 million homes, destroyed around 8,500 structures, 4 million acres of land, and killed more than 30 people. There is no consensus as to the total monetary cost of the fires, estimates for this year alone range between US$7 and $10 billion.

Curating databases of this information has become increasingly difficult, as the fires continue to rage throughout various regions covering an extensive geographical range. Receiving accurate and up to date information on the impacts of these fires is critical, as the physical and economic costs are astronomical for both public and private entities. Climate change exasperates the strain placed on entities working against the fires, from investors and state actors down to municipal fire brigades.

As the Sanderson fire continues to scorch Southern California at the time of this article’s publication, it seems appropriate to explore the global impacts of the increased trends of wildfires, as well as which areas are potential entry points for investors and innovators. Reducing the causes and consequences of wildfires is an important aspect of our global attention towards ameliorating the effects of climate change. Through collectivizing the attention and resources of climate focused entities towards the wildfire impacts there is great potential to disrupt the negative global wildfire patterns we see today.

As reported by NASA’s Global Climate Change center, the world has warmed by 1.9 degrees Fahrenheit overall, with the past five years being the warmest on satellite records. A warmer general environment expands both the duration and intensity of fire risk conditions across the globe. The combination of both warming and drying conditions which follow this global temperature increase creates a greater global likelihood for drought in the Americas, the Mediterranean, southern Africa, southeastern China, and southern Australia.

This indicates that the duration of drought periods (and thus fire risk) will become longer and more severe. These results can already be observed in regions across the globe, including Siberia and Central Africa. Exploring the diametric consequences suffered by both regions helps identify the expanse of opening investment markets.

Siberia is known traditionally for its cold, snowy tundra, absent of the conditions necessary for wildfires. However, in July 2019 satellite photos showed massive fires in the Krasnoyarsk region of north-central Russia spanning over 160,000 hectares. Revisiting the region in 2020, the wildfire crisis dramatically expanded to cover 20.9 million hectares of land and 10.9 million hectares of forest.

As noted by Greenpeace International, in context the global tree loss in 2019 was 11.9 million hectares. Not only does this volume of carbon output from the burning forest exasperate the current ozone layer depletion, but the sheer expanse put great financial strain on the country and its governing bodies. Similarly to the troubles in California, fire management teams in Siberia also struggle in data collection due to geographical and technological deficiencies.

Patterns of decreased fires can be as important to monitor as increased patterns in a region. Africa has historically been known as the “fire continent” by NASA due to its significant emissions of carbon via wildfires. When left unattended, these fires caused notable economic and ecological harm.

However, over the past few years, NASA has recorded an unexpected decrease in Central African fires. The decrease in fires has been attributed to the significant decrease in flammable biomass lost to climate change, with the region generally becoming more arid.

This consumption of large portions of African biomass by fires has far reaching consequences for the future of air quality and food security in the region. Reports in October of this year foreshadowed this fear following the increasing volume of dust clouds in the region. Dust clouds form in regions of arid soil, and are carried by the wind across the continent, and signify a loss of viable soil in the center of Africa. Both cases, Central Africa and Siberia, are imminent sources of environmental strain but also function as windows of opportunities for investors to make a positive contribution towards fighting these damages.

In response to the growing threat presented by wildfires, creative solutions and partnerships have offered sources of positivity. One example is the Forest Resilience Bond, founded by the nonprofit investment firm Blue Forest Conservation in 2019. Its purpose is to bring together the resources of private investors with state entities towards preventing and reducing damage from wildfires in the Tahoe National Forest. Technological feats such as fireball-dropping drones, made for the purpose of setting backfires, are also being employed towards fire prevention. Although wildfires represent a formidable environmental threat, innovative solutions can be found at the crossroad between finance and technology.